The Words of Hope Devotional is a non-profit, donor-supported publication whose goal is to encourage readers to grow in faith through the practice of daily Bible reading and prayer.

Food for the Body and Soul

The first car arrived early and waited. By 5:00 p.m., the line of vehicles stretched beyond sight. They came because once again, Angela, a local attorney with a huge heart, had arranged for dinner.

“Hey! How are you guys doing? Three bags for the blue Buick!” she called out, turning around to the waiting volunteers. “Four for this one and the next car needs two!” So began the next 20 minutes as 150 to 200 meals on any given night were distributed, rapid fire, to displaced flood victims.

Twice a week for almost six months, she obtained restaurant donations for food, organized an ever-changing group of volunteers to assemble and distribute meals. Personally knowing the community was an advantage. More often than not, Angela knew the vehicle occupants and meal numbers without having to ask. Instead, she quickly inquired as to how they were doing and what other needs they had. She’d “look into it.” Just to know that someone cared was enough to fill their soul even as they were handed food for their bodies.

Was anyone ever turned away? No. Angela saw a desperate need in the midst of her flood-ravaged community and met it. No questions asked. She fed the hungry more than 5,000 meals. Scripture tells us that in this act, she also fed the Lord. Imagine his response. —Tammy DeRuyter

As you pray, ask God for opportunities to serve your neighbors and in doing so serve him too.

Tammy DeRuyter is a former stockbroker turned student of theology and history. She holds master’s degrees in both from Fuller Theological Seminary and Central Michigan University. Married for more than 25 years to Michael, an ordained RCA pastor, they have three emerging, young adult children ages 20, 21, and 22—the youngest of whom was adopted at 11. 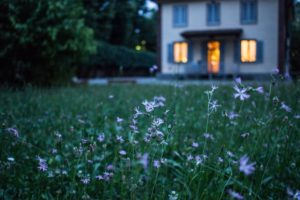 Read: John 13:31-35 By this all people will know that you are my disciples, if you have love for one another. (v. 35) The 22-foot pontoon boat hung precipitously from the top of the 35-foot tree. As it swayed in the

Read: Luke 23:26-38 The people stood by, watching, but the rulers scoffed at him. (v. 35) The Sanford Clock had been a focal point of the community for years. Its letters proudly beamed “Welcome to Sanford!” Nothing fancy, but a warm

Read: Titus 3:1-15 Let our people learn to devote themselves to good works, so as to help cases of urgent need. (v. 14) Bill and Kandis have lived in Midland for 33 years. On May 20th, as thousands of homes were

Read: Ruth 1:7-17 Where you die I will die, and there will I be buried. (v. 17) After embracing and kissing each of her daughters-in-law, Naomi urged them to return to their families of origin. One did, but Ruth refused, instead

Read: Romans 5:1-9 Endurance produces character, and character produces hope. (v. 4) In a terrifying rush of destruction, the entire town of Sanford quickly became enveloped in a murky swath of contaminated water, debris, upended trees, and twisted metal. In this

Read: 1 Chronicles 12:1-18 Peace, peace to you, and peace to your helpers! (v. 18) In Michigan, homeowners have basements that often serve as a recreational room, spare bedroom, or simply additional storage. When the dams burst, water completely filled this

I Will Carry You

It’s Not My Fault

Who Am I? Enough

Listen to the daily devotional wherever you get your podcasts.
Start listening!

Words of Hope devotionals are available on The Bible App!
Learn more!

Autobiographies and reading plans for groups or individuals.
Browse the Library
Grow in Your Faith