When You Feel Forsaken

When Jesus cried out on the cross, “My God, my God, why have you forsaken me?” he was all alone, but because he was abandoned by God, you never have to be.

Have you ever been forsaken? If there is a word more chilling than that, an experience more dismal, I don’t know what it is. Forsaken. To be forsaken is to be deserted by others, abandoned, left completely alone. When people forsake you, they withdraw from you entirely. They have nothing more to do with you; they act as though you don’t exist.

Feeling forsaken is worse than loneliness. There’s the added pain of being deprived by another, almost betrayed. Someone has heartlessly let you down. Let’s say you are in need or distress. You’re counting on someone to be there, to stand by you, but he or she is nowhere to be found. Or someone promises to meet you in a strange place, amid pressing dangers, but doesn’t appear. You feel doubly desolate for having been duped.

The closer the tie, the fuller the trust, the more crushing is the blow when we are forsaken. A soldier is utterly dismayed when a group of buddies in his platoon pull back to safety from their positions around him, leaving him all by himself, helplessly exposed to enemy fire. A husband can’t get over it because his wife of 29 years suddenly leaves him when he’s ill and out of a job. She goes to another city, another man, with scarcely a look backward. Or here’s a mother with four children whose husband leaves the country with a young woman half his age. Never a note, never a check, never even a goodbye; he simply forsakes his family. What a trauma for them!

In some cases, we can see the break coming for a long time. Relations are becoming strained, distance is developing. It’s no great surprise when the colleague or partner finally moves away. It’s when we have no warning that being forsaken perhaps hurts the worst. In Shakespeare’s Julius Caesar, Mark Antony calls the wound inflicted on Caesar by Brutus “the unkindest cut of all.” Caesar might have expected betrayal from some in his retinue, but never from this trusted friend. That came as a total shock. “Et tu, Brute?” – “You also, Brutus? You want to be rid of me just like all the rest?” That must have caused more pain than the dagger thrust. Life hardly seems worth living any more when the one you love best and rely on most, suddenly proves false and forsakes you.

Have you ever felt that God was doing that to you? That’s the ultimate forsakenness, isn’t it? The Lord has become your refuge and your strength, your light and your salvation. You’ve put your whole trust in him; you’ve experienced his delivering power. You’ve found him adequate for all your needs. But it may be that now, in what you’re going through at this moment, he seems to have abandoned you. You’ve had prayers answered in the past, but now nothing changes when you pray. It’s as though God has turned a deaf ear to all your cries for help. Some loss, some tragedy, has devastated your life and shaken the very foundations of your faith. All sense of God’s presence and comfort has left you. “Where were you, God, when this terrible thing happened to me? Why didn’t you do something?” And the suffering goes on and on. “Where are you now, God? I’m your servant; I’ve put my life on the line for you. What’s happened? Why are you suddenly so far away?”

Let me say to you as your friend and brother that many, many devout believers have felt as you do. I studied through the Scriptures some time ago, noting especially the anguished questions which God’s people sometimes ask. Here are some of them:

You can identify with those feelings, can’t you? You’ve been in that place. Maybe you are there today. Though you wouldn’t come right out and say it to others, you desperately fear that it may be so: God has left you.

There is no part of our human experience into which Jesus Christ has more deeply entered than this one. He knew, just as we do, and more than any of us, what it is to be forsaken. Reflect on his career for a moment. Think about the townspeople with whom he grew up in Nazareth. They all loved him when he was a boy. He grew “in wisdom and stature, in favor with God and man.” He was one of their own. When his ministry had begun and he first visited their synagogue in Nazareth, “they all spoke well of him.” But when he went on to tell of God’s mercy to Gentiles, how God passed by the chosen people to show kindness to a widow from Sidon and a soldier from Syria, their attitudes changed. They were furious, ran him out of town, even tried to push him over a cliff. He was forsaken by his boyhood friends, by the villagers he had known for years.

At an early period in his travels, he was extremely popular. Great crowds flocked to hear him; many were eager to become his followers. But there came a time when large numbers of those would-be disciples “drew back and no longer went about with him.” The scriptures tell us that his own brothers did not believe in Jesus during those days. They not only declined to follow him; they sometimes impugned his motives and even suggested that he was out of his mind.

When Jesus came to Jerusalem at the climax of his ministry, great multitudes welcomed him there. “Hosanna to the Son of David!” they cried. “Blessed is he who comes in the name of the Lord!” Nothing was too much to do for him then. They scattered palm fronds in his path. They even laid down their garments to prepare the way for his royal entry. But only a few days later, some of those same people, when they could have spoken up in his favor, went along with the mob that screamed madly for his blood. When it came to a choice between Jesus and a rebel guilty of murder, they said, “Give us Barabbas!”

But then, of course, there were his twelve disciples, the inner circle of his followers. Surely he could count on them! They had promised to follow him even to death. But one of them sold him away to his enemies for a few silver coins. The most outspoken of them all, Simon Peter, denied with a volley of profanity that he had ever known Jesus. And all of them, when he was finally arrested, forsook him and ran away. So much for the disciples, his best friends! Was anyone ever more wretchedly abandoned than was Jesus?

But he had to endure something worse, immeasurably worse. It came upon him palpably, terribly in the Garden of Gethsemane. The disciples saw how troubled he was, how overwhelmed with a kind of anguish. “My soul is exceeding sorrowful,” he said, “even unto death” (Matt. 26:38, KJV). With his sweat like great drops of blood, he fell on the ground and prayed that some mysterious “cup” might pass away from him, that he might not have to drink it.

What was it that so convulsed him, that filled him with such horror? Was he afraid to die? No, he had known since early in his ministry that an untimely death awaited him. Was the coming ordeal of crucifixion too much to face? No, he had been ready for a long time to face shame, rejection, and agony. He marched toward it, face set like a flint. He strode out to meet his captors when they came to arrest him. He refused to call on the hosts of heaven for help or deliverance. He never showed the slightest trace of fear about what any man or men could do to him.

No, the cup must have been something else, something more, something no one else had ever confronted. It was Jesus’ portion to bear our sins, to suffer what was due to us, to be, as the Scriptures startlingly relate, “made sin for us.” In that cup was the judgment of a holy God against moral evil. To drink it was to taste of hell, of banishment from God’s presence. That dreadful reality brought forth Jesus’ cry from the cross, “My God, my God, why have you forsaken me?” There on Golgotha, while the skies grew black, a deeper darkness came over Jesus. As he bore our sins in his own body on the cross, it was as though a shadow passed between him and his Father’s face.

Never had Jesus felt that before. The joy of his entire life had been this: “The Father is with me; he has not left me alone.” But now, abandoned by fickle crowds, scorned by his nation, betrayed and denied by close friends, Jesus, identified with sinners, felt himself forsaken by God.

Do you know what that can mean for your faith, for your life? Let me tell you what it means for me. When I hear Jesus cry out, “My God, my God, why have you forsaken me?” I know that he is a brother to us all. He has shared our human lot. He has been where we have been, felt what we have felt. He, the risen, living One, is not remote from our struggles, our agonizing questions. He can sympathize with us. He understands.

But more, when I hear that cry of dereliction, I remember that he stood in my place, carried my burden, paid my debt. “Surely,” sings the prophet, “he has borne our griefs and carried our sorrows . . . He was wounded for our transgressions, he was bruised for our iniquities; . . . All we like sheep have gone astray; we have turned every one to his own way; and the Lord has laid on him the iniquity of us all” (Isa. 53:4-6). Jesus is my sin-bearer, the One who was condemned for me.

But last and best of all, his forsakenness means that I, with all who believe in him, will never be abandoned by God. That is the great exchange, friends. He is condemned so that I can be forgiven. He dies that I may live. He drinks to its dregs the bitter cup so that I may take from his pierced hands a cup of salvation. As an old communion liturgy puts it, “He cried out, ‘My God, my God, why have you forsaken me?’ so that we might be accepted by God and never be forsaken of him.”

That doesn’t mean that we will never feel abandoned any more, that it will never seem to us that God is absent. Experiences like that have come to God’s choicest saints and still come today. We may still cry out in our darkest hours, “Why are you so far from helping me, from the words of my groaning?” But because of Good Friday, because of Christ forsaken for us, even our “whys” are addressed to the One we still call, “My God, my God.” Through Jesus, he is our God, our Father, now and always. That’s his pledge. Hear the promise again in these words of a great hymn: 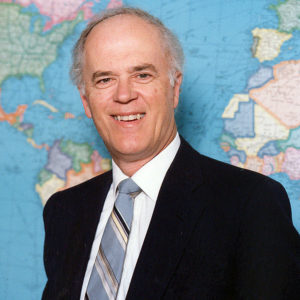 Dr. William C. Brownson was the President Emeritus of Words of Hope. Dr. Brownson served Reformed churches in Lodi, New Jersey, and Chicago, Illinois. In 1964 he was appointed Professor of Preaching at Western Theological Seminary, a position he occupied for ten years before serving at Words of Hope. In addition to a widespread speaking ministry in churches, on university campuses and at conferences, Dr. Brownson wrote extensively for the Church Herald, other Christian periodicals, and authored many books. Dr. Brownson died April 1, 2022.