Jeremiah: The Word of the Lord

In our study of this passage from Jeremiah we will find five characteristics of a true prophet of the living God.

Jeremiah had far and away the most difficult task God ever assigned to a man. He was called to proclaim the word of God to a people who had rebelled against God. They were so deeply hardened in their sin, so stubbornly set in their resistance to God, that there was no remedy. It was Jeremiah’s responsibility to tell these people that judgment was certain and sure. The city of Jerusalem with the temple would be completely destroyed. God had said,

In carrying out this assignment he faced such hatred and opposition that at one point he cursed the day in which he was born. One of the priceless values of the Book of Jeremiah is that it offers us a keen analysis of the human heart, including the mind and heart of the prophet himself. He so frankly and freely describes his own emotional involvement in his mission that at one point he exclaims,

When I read this passage to a friend recently he said, “That sounds as if it came out of the morning newspaper.” There are thousands of men today occupying the pulpits of this country who speak their own opinions. If the church is to survive in this country today, it is imperative that we learn once more to distinguish between true and false prophets. “What is the chaff to the wheat?” says the Lord. Just as chaff can be distinguished from the wheat, so the true prophet can be distinguished from the false prophet. In our study of this passage from Jeremiah we will find five characteristics of a true prophet of the living God.

First, a true prophet is called to preach. Jeremiah begins his account of his prophetic work with a description of the call he had from the Lord.

So the prophet is called to his office by none other than the Lord Himself. Isaiah in the temple, Moses at the burning bush, Amos the herdsman whom the Lord took from following the flocks and said, “Go, prophesy to my people Israel”—all were called to proclaim the word of the Lord.

We must understand that the office of the minister of the Word of God in the Christian church is rooted in the office of the prophet in the Old Testament. Hence the true church has always taught that God calls men to preach. This does not mean that they have to see a visible sign in the sky or hear an audible voice, but there must be a deep inner compulsion that one is called of the Lord to deliver His Word to the people. Calvin and the other Reformers spoke sternly against those who would intrude themselves upon this office. The historic liturgy of the Reformed churches, at the installation of a minister, asks this question, “Do you feel in your heart that you are called of God’s church and therefore, of God Himself, to this holy ministry?”

Only this sense of a call from God will enable a man to preach when he runs into difficulty or faces opposition. Jeremiah was so relentlessly persecuted by false prophets as well as by the rulers, that at one point he thought of giving up his ministry. However, instead of tossing in the towel as so many ministers are doing today, he said,

He was compelled to preach. I have always liked the distinction made by a great English preacher in the nineteenth century named Chadwick, who said that he would rather pay to preach than be paid not to preach.

One reason for the sickness of the church today is that we no longer stress the necessity of a call to preach the gospel. Today we recruit men for the ministry. We have made it a profession instead of a calling. Young ministers are trained to do everything but preach. While training is necessary for the ministry, it must be understood that the men to be trained must know that they are called of God to preach the gospel.

The second characteristic of a true prophet and a true minister of the Word of God is that he speaks with authority. He comes saying, “Thus says the Lord.” He hears God speak and then he faithfully speaks the Word God gave him. There is a dramatic passage in chapter 37 of the Book of Jeremiah which describes Zedekiah, the young king, in a private interview with the prophet in the palace just before the fall of Jerusalem. The frightened young king asks, “Is there any word from the Lord?” The prophet answers, “There is” (v. 17).

So there are millions in our day who are anxiously asking, “Is there any word from the Lord?” and it is our obligation as true ministers of the Word of God to say, “There is.” But someone says, “Even if those ancient men did actually hear the word of God so that they could speak with authority, how can we hear it today?” The answer is that we find that word in the Bible. The revelation that God made of Himself to the prophets of the Old Testament is not limited to them. The Word of God endures forever. It is always true. The word spoken audibly to the prophets was committed to writing by the inspiration of the Holy Spirit so that we have the authentic Word of God in the Bible. This is why we must preach from the Bible if we would preach the truth.

But someone says, “This will not work in our day. People will not listen if you come saying, ‘Thus says the Lord.’ An authoritative approach to religion turns them off.” I would like to answer these objections with one contemporary example to show that the objectors are wrong. It is the preaching of Billy Graham. Recently I watched a telecast of one of Billy Graham’s meetings from last summer’s Chicago Crusade. That night Billy preached on the Ten Commandments, all ten of them in one sermon. He quoted the commandments, explained them, and applied them, right down the line from one to ten. When he got to the seventh commandment, “Thou shalt not commit adultery,” there was no mincing of words. There were no concessions to permissiveness. Billy’s formula, the Bible says, is the formula of the prophets, “Thus says the Lord.” This dedicated, talented preacher speaks to more people than any preacher in our time and he does it with the authority of the Word of God.

The third characteristic of true prophetic preaching is found in the declaration of the judgment of God on unrepentant sinners. This is the missing note in today’s preaching. When Paul expounds the gospel of Jesus Christ in the Letter to the Romans, he begins with judgment. “The wrath of God is revealed from heaven against all unrighteousness.” In the Bible Judgment Day is real, and the gathering clouds around us should indicate how near it may be for all of us today. False prophets can be detected in that they do not speak of judgment. They say, “It is well, it is well,” when it is not well. “They have healed the wound of my people lightly, saying, ‘Peace, peace’ when there is no peace” (Jer. 6:14).

In Paul’s second Letter to Timothy there is a prediction of the kind of preaching there will be in the last days.

So God’s word to His preachers, in both the Old and New Testament is:

The fourth distinguishing mark of the true prophet is that the message of salvation is always directed to the individual. The message of the gospel, in the Old Testament as well as the New, is primarily concerned with the individual’s relation to God. This is profoundly set forth in Jeremiah’s doctrine of the new covenant (Jer. 31:31-34). This also is largely missing in today’s preaching. Paul sums up the substance of the Bible when he says, “God was in Christ reconciling the world to himself, not counting their trespasses against them, and entrusting to us the message of reconciliation” (2 Cor. 5:19). Paul immediately adds a note declaring that this is the message Christ’s true ambassadors are called to preach (2 Cor. 5:20).

The fifth distinguishing mark of the true prophet is that the Word of God has power. The Word of God, under the preaching of Jeremiah and every true prophet, is directed at the human heart, which is hardened by sin and rebellion against God. But the Word of God has power to break that heart and to humble it. The words of men falling on the hardened hearts of sinners are like Ping-Pong balls bouncing off the surface of the table, but God’s Word is like a hammer. The Lord Himself says, “Is not my word like fire, and like a hammer which breaks the rock in pieces?” (Jer. 23:29).

This power of the Word of God to break the human heart has been demonstrated in history again and again. It was demonstrated in a wonderful way, first of all, at Pentecost. As Peter preached the gospel to the men who had crucified Jesus, calling them to repentance, they exclaimed, “Men and brethren, what shall we do?”

When George Whitefield preached the gospel in the days of the Great Awakening in the eighteenth century, the hearts of sinners were broken as thousands came to Christ in tears of repentance and faith. In his Journal, Whitefield tells the story of a man who came to hear him preach in order to attack him. It was an outdoor meeting. The man had his pocket filled with stones. He pressed through the crowd to get within range of Whitefield’s head. But as he made his way forward slowly, he began to listen. Then one by one the stones came out of his pocket and fell to the ground. After the meeting was over, this man went to Whitefield and said, “I came here to break your head; but God, through your preaching, has broken my heart.” In the same period John Nellson says of Wesley’s preaching, “My breast beat like the pendulum of a clock, and when he spoke I thought his whole discourse was aimed at me.”

I close today with a powerful passage from the fifth chapter of the Book of Jeremiah in which the prophet denounces the sin and rebellion of God’s people. They will not repent; they ignore the word of the Lord. They are secure in their sins. They do not think of judgment. This is Jeremiah’s final appeal to these people.

The matter of the authenticity of the Word of God is not an academic question. It is not a question that is to be discussed only in the classrooms and lecture halls of seminaries, colleges, and universities where scholars sit in judgment on the Word of God. The Word of God is alive. God says, “Behold, I have set before you life and death, choose life.” Have you chosen life? Have you confessed Christ as your Savior? If not, what will you do when the end comes? 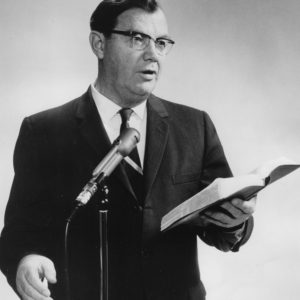 During the last 20 years of his active ministry (from 1952 - 1972) Dr. Bast also served as the speaker on the Temple Time (now Words of Hope) broadcast until he was forced to retire due to ill health. Dr. Bast died in 1983. In 1986 Western Seminary established a preaching program in his honor which includes an endowed chair, the Henry Bast Professor of Preaching.